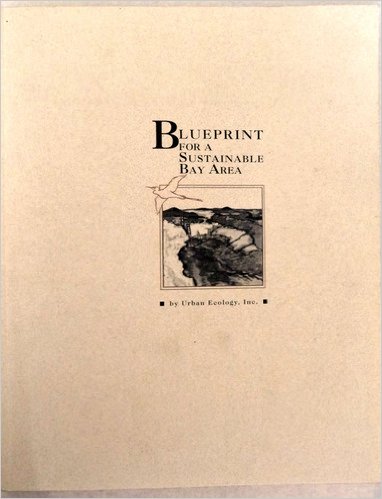 We are often asked by those new to the subject to recommend some initial readings on urban sustainability. Following is a brief listing of some recent works. Many of these books have been reviewed in past issues of The Urban Ecologist, and several are available through the UE office.

Blueprint for a Sustainable Bay Area, Urban Ecology, Oakland, CA, 1996. An extensively illustrated look at how the San Francisco Bay Area can become more sustainable, written for a popular audience.

The Ecology of Commerce, by Paul Hawken, Harper-Collins, New York, 1993 (reviewed Winter 1994). A visionary work looking at how economics can be retooled to support the restoration of natural systems. Discusses specific mechanisms such as green taxes, and provides a theoretical overview of “sustainable businesses.”

End of the Road: The World Car Crisis and How We Can Solve It, by Wolfgang Zuckerman, Chelsea Green Publishing, Post Mills, VT, 1991 (reviewed Spring 1993). Dealing with the growth of automobile use is one of the biggest challenges of sustainable urban development, and this entertaining book systematically lists steps to end the “car crisis.”

Green Plans: Greenprint for Sustainability, by Huey D. Johnson, University of Nebraska Press, Lincoln, 1995. A look at how national green plans can set the stage for sustainable development, with examples from The Netherlands, Canada, and New Zealand.

Our Ecological Footprint: Reducing Human Impact on Earth, by William Rees, New Society Publishers, Philadelphia, 1996 (reviewed in 1997 #I). A popular book with catchy illustrations in which the author presents a “footprint” model for determining how much land area is required to support urban inhabitants.

Planning for a Sustainable Environment. A Report by the Town and Country Planning Association, Earthscan Publications, London, 1993. A thorough but dry consideration of topics such as land use planning, energy policy, ecosystems, natural resources, pollution, waste, transport, regional planning, and economic development, by a Sustainable Development Study Group consisting of many leading British researchers.

Reviving the City: Toward Sustainable Urban Development, by Tim Elkin and Duncan McLaren, with Mayer Hillman, Friends of the Earth, London, 1990 (reviewed Spring 1992). A look at sustainable urban development from an environmental perspective, emphasizing steps to address energy use and pollution rather than social issues or land use.

Shaping Cities: The Environmental and Human Dimensions, by Marcia Lowe, Worldwatch Paper 105, The Worldwatch Institute, Washington, D.C., 1991. An excellent, concise overview of ways that cities can be made more sustainable, including discussions of urban form, transportation, energy use, water use, housing, land use, and social justice issues, with examples from around the globe.

Sustainable America: A New Consensus, President’s Council on Sustainable Development, U.S. Government Printing Office, Washington, D.C., 1996. Although a consensus document that doesn’t go nearly far enough in some ways, the PCSD’s report does outline many useful principles and examples of sustainable development, and is remarkable in that it exists at all.